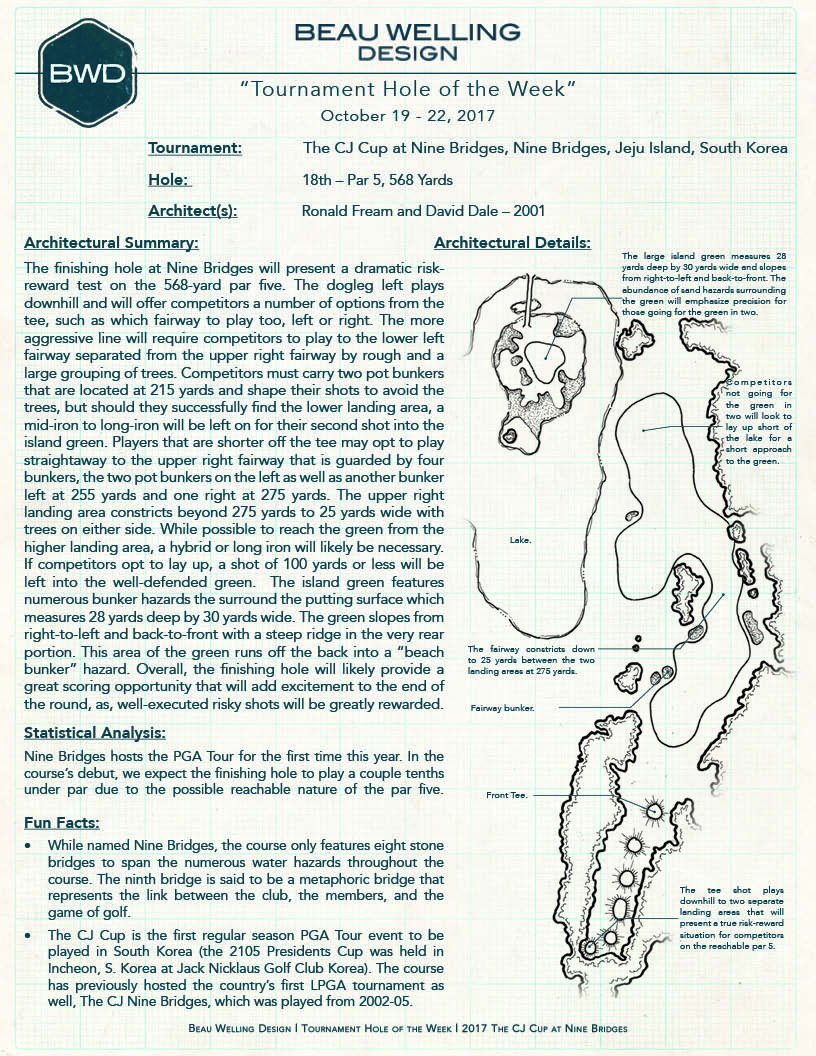 The finishing hole at Nine Bridges will present a dramatic risk-reward test on the 568-yard par five. The dogleg left plays downhill and will offer competitors a number of options from the tee, such as which fairway to play to, left or right. The more aggressive line will require competitors to play to the lower left fairway separated from the upper right fairway by rough and a large grouping of trees. Competitors must carry two pot bunkers that are located at 215 yards and shape their shots to avoid the trees, but should they successfully find the lower landing area, a mid-iron to long-iron will be left on for their second shot into the island green. Players that are shorter off the tee may opt to play straightaway to the upper right fairway that is guarded by four bunkers, the two pot bunkers on the left as well as another bunker left at 255 yards and one right at 275 yards. The upper right landing area constricts beyond 275 yards to 25 yards wide with trees on either side. While possible to reach the green from the higher landing area, a hybrid or long iron will likely be necessary. If competitors opt to lay up, a shot of 100 yards or less will be left into the well-defended green. The island green features numerous bunker hazards the surround the putting surface which measures 28 yards deep by 30 yards wide. The green slopes from right-to-left and back-to-front with a steep ridge in the very rear portion. This area of the green runs off the back into a “beach bunker” hazard. Overall, the finishing hole will likely provide a great scoring opportunity that will add excitement to the end of the round, as, well-executed risky shots will be greatly rewarded.

Nine Bridges hosts the PGA Tour for the first time this year. In the course’s debut, we expect the finishing hole to play a couple tenths under par due to the possible reachable nature of the par five.