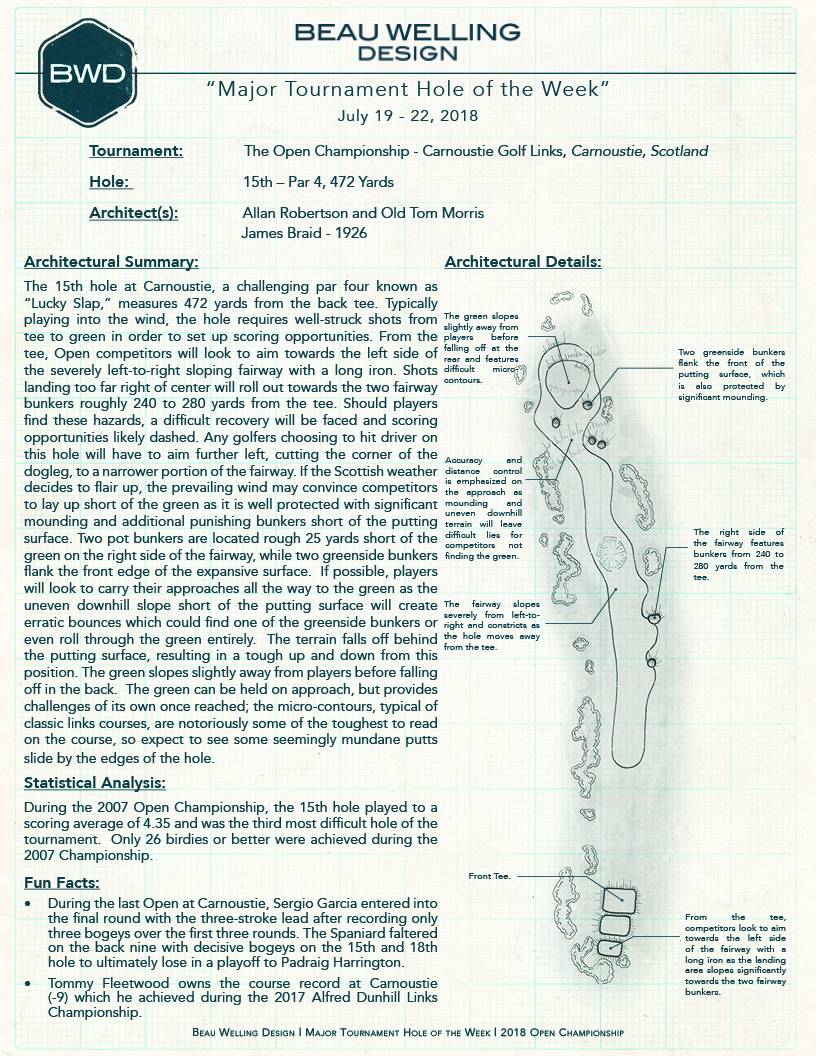 The 15th hole at Carnoustie, a challenging par four known as “Lucky Slap,” measures 472 yards from the back tee. Typically playing into the wind, the hole requires well-struck shots from tee to green in order to set up scoring opportunities. From the tee, Open competitors will look to aim towards the left side of the severely left-to-right sloping fairway with a long iron. Shots landing too far right of center will roll out towards the two fairway bunkers roughly 240 to 280 yards from the tee. Should players find these hazards, a difficult recovery will be faced and scoring opportunities likely dashed. Any golfers choosing to hit driver on this hole will have to aim further left, cutting the corner of the dogleg, to a narrower portion of the fairway. If the Scottish weather decides to flair up, the prevailing wind may convince competitors to lay up short of the green as it is well protected with significant mounding and additional punishing bunkers short of the putting surface. Two pot bunkers are located rough 25 yards short of the green on the right side of the fairway, while two greenside bunkers flank the front edge of the expansive surface. If possible, players will look to carry their approaches all the way to the green as the uneven downhill slope short of the putting surface will create erratic bounces which could find one of the greenside bunkers or even roll through the green entirely. The terrain falls off behind the putting surface, resulting in a tough up and down from this position. The green slopes slightly away from players before falling off in the back. The green can be held on approach, but provides challenges of its own once reached; the micro-contours, typical of classic links courses, are notoriously some of the toughest to read on the course, so expect to see some seemingly mundane putts slide by the edges of the hole.

During the 2007 Open Championship, the 15th hole played to a scoring average of 4.35 and was the third most difficult hole of the tournament. Only 26 birdies or better were achieved during the 2007 Championship.

Fun Facts:
During the last Open at Carnoustie, Sergio Garcia entered into the final round with the three-stroke lead after recording only three bogeys over the first three rounds. The Spaniard faltered on the back nine with decisive bogeys on the 15th and 18th hole to ultimately lose in a playoff to Padraig Harrington.
Tommy Fleetwood owns the course record at Carnoustie (-9) which he achieved during the 2017 Alfred Dunhill Links Championship.