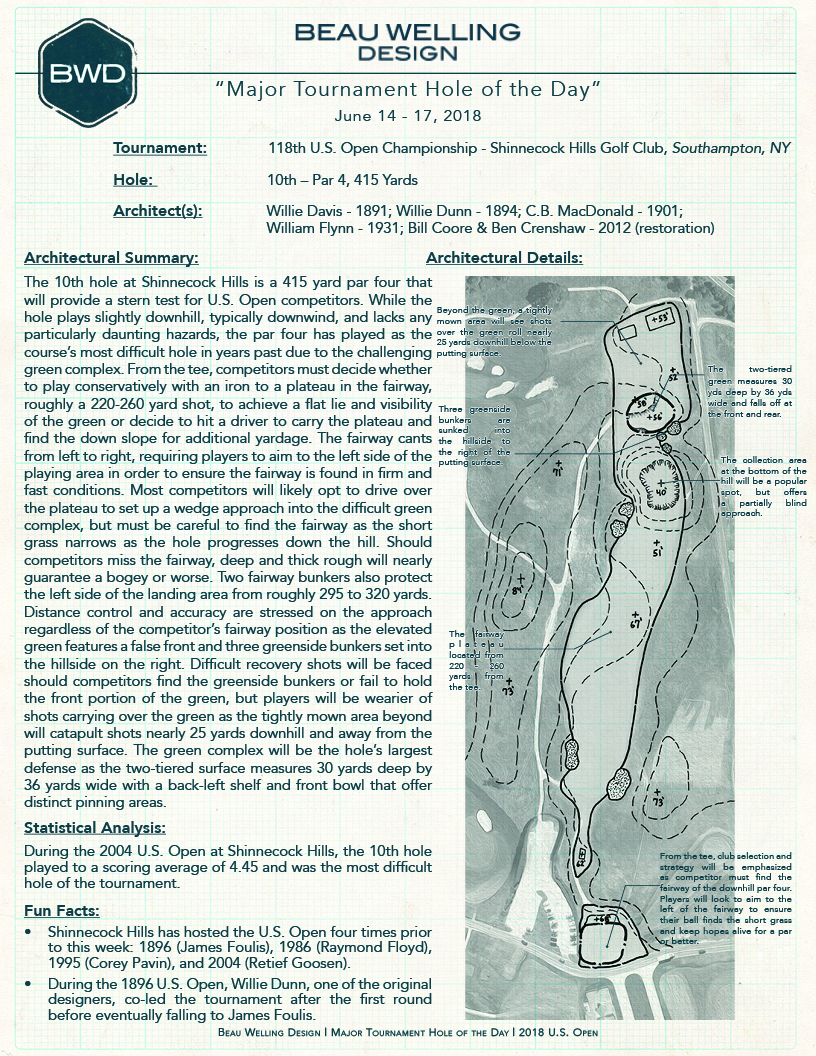 The 10th hole at Shinnecock Hills is a 415 yard par four that will provide a stern test for U.S. Open competitors. While the hole plays slightly downhill, typically downwind, and lacks any particularly daunting hazards, the par four has played as the course’s most difficult hole in years past due to the challenging green complex. From the tee, competitors must decide whether to play conservatively with an iron to a plateau in the fairway, roughly a 220-260 yard shot, to achieve a flat lie and visibility of the green or decide to hit a driver to carry the plateau and find the down slope for additional yardage. The fairway cants from left to right, requiring players to aim to the left side of the playing area in order to ensure the fairway is found in firm and fast conditions. Most competitors will likely opt to drive over the plateau to set up a wedge approach into the difficult green complex, but must be careful to find the fairway as the short grass narrows as the hole progresses down the hill. Should competitors miss the fairway, deep and thick rough will nearly guarantee a bogey or worse. Two fairway bunkers also protect the left side of the landing area from roughly 295 to 320 yards. Distance control and accuracy are stressed on the approach regardless of the competitor’s fairway position as the elevated green features a false front and three greenside bunkers set into the hillside on the right. Difficult recovery shots will be faced should competitors find the greenside bunkers or fail to hold the front portion of the green, but players will be wearier of shots carrying over the green as the tightly mown area beyond will catapult shots nearly 25 yards downhill and away from the putting surface. The green complex will be the hole’s largest defense as the two-tiered surface measures 30 yards deep by 36 yards wide with a back-left shelf and front bowl that offer distinct pinning areas.

During the 2004 U.S. Open at Shinnecock Hills, the 10th hole played to a scoring average of 4.45 and was the most difficult hole of the tournament.