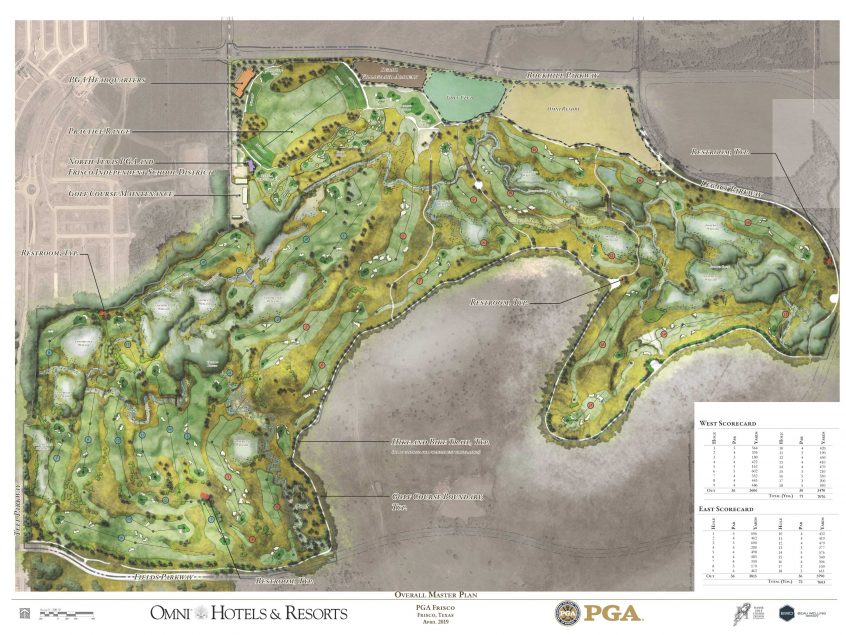 After months of speculation, in December the PGA of America announced was moving its operations and headquarters from Palm Beach Gardens, Fla., to Frisco, Texas. The organization will anchor a 600-acre, mixed-use development that includes two public golf courses, which will host more than 20 championships in its first 12 years of operation. Earlier the week, PGA of America officials revealed new details on the undertaking.

“This is so much bigger than our headquarters, so much bigger than a couple of golf courses,” PGA of America CEO Seth Waugh said. “It’s really trying to create a community of golfers. I refer to it as a laboratory, a university, a destination not only to play but to learn everything associated with the game.”

As outlined in the PGA of America’s agreement with the Frisco City Council, the PGA will bring two PGA Championships—announced on Monday to be held in 2027 and 2034—to the Gil Hanse-designed “East Course” at PGA Frisco, which will run more than 7,600 yards from the tips.

Though a Ryder Cup will not be in this 12-year span—the event has already been awarded to Bethpage in 2024, Hazeltine National in 2028, Olympic Club in 2032 and Congressional in 2036—sources have told Golf Digest that, in all likelihood, the biennial match will visit Texas in 2040.

Hanse said at a Monday media event that he expects to incorporate many design elements from renowned architect Perry Maxwell (Hanse is overseeing a renovation at Maxwell’s Southern Hills) while making sure the East has plenty of spectator vantage points.

The West Course will be helmed by Beau Welling and is expected to be a more playable, “fun” set-up compared to the East. Welling is also developing a short links. The golf courses, clubhouse, practice areas and associated public facilities will be owned by the city, with the golf facilities open to local high school golfers.

Other parts of the development will feature a short course and practice area, a clubhouse, Class AA office space, a 500-room Omni resort and 127,000-square-foot conference center, a retail village and a park. Waugh hopes the site becomes the “Silicon Valley” of golf.

A groundbreaking is expected by the end of the year, with the courses open for play in 2022.