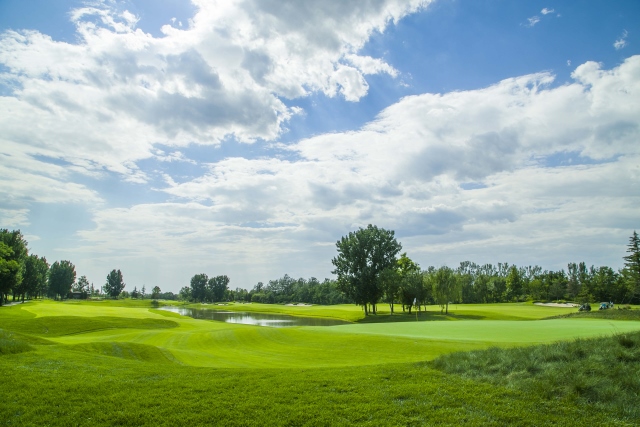 The 27 Club, named for the 27 major championship winners contributing their visions to the course, is one of the most ambitious golf projects to open in Asia as of late. A joint collaboration between designers Beau Welling and Thomas McBroom, the 27-hole championship course officially opened for play on July 1.

Located in Tianjin, the fourth largest city in China, the 27 Club is the newest addition to the Pacific Links International portfolio of high-quality member and affiliated golf clubs across the world.

The first project for both Beau Welling Design and Thomas McBroom Golf Design in Asia, the club presents a truly unique concept as Welling and McBroom worked to integrate design thoughts from each champion into a hole. Employing the champions’ design ideas, many of which relate to elements from venues where they won a major title, McBroom and Welling unified the holes into a consistent, world-class golf experience, already being touted as one of the best in China.

“The quality of what we were able to do here is off the charts, and to see members enjoying the course is fantastic,” said Beau Welling, whose firm’s principals have been involved with the development of over 90 golf courses worldwide. “I feel very fortunate that we were able to create something so special with Mr. Du Sha in China and accomplish his goal of a world-class tournament venue involving so many great champions.”

Formerly the 36-hole Yangliuqing Golf Club, the course underwent a complete renovation to create the championship parkland layout consisting of the 9-hole North, West, and South courses. A million cubic meters of earth were moved on the site to create sweeping elevation changes above man-made lakes to maximize the site’s drama and character.

“Working with the 27 major champions was a terrific experience and along with Beau I think we have created an exceptional golf course and certainly one of the best in China,” added Thomas McBroom. “Each of the 27 holes is unique, using elevation, topography, large lakes and boulder strewn creeks to strategic and aesthetic advantage. The motif for the bunkering is utterly unique and dramatic.”

The completion of The 27 Club represents a milestone for Du Sha, Chairman of Pacific Links International, who undertook the ambitious mission to bringing together 27 champion golfers to partake in his quest to build one of the world’s finest golf tournament venues. Mr. Du’s motivation and commitment to a quality without compromise are not only evident at The 27 Club, which is the focal point of the six star international golf resort and high-end residential community, but throughout the Pacific Links collection of courses spanning the globe.

The 27 Club was designed to provide an unforgettable and enjoyable experience for golfers of all levels, while also challenging the world’s best players. The club is already preparing to host to its first professional tournament as the Champions Tour will stage the Pacific Links China Championship from September 18-20, 2015. The event, formerly contested in Hawaii as the Pacific Links Hawai’i Championship, will see top Champions Tour professionals competing for a $2.5 million purse and Charles Schwab Cup points in the Tour’s first stop in China.

The official grand opening of the golf course will coincide with the Champions Tour event later this year.