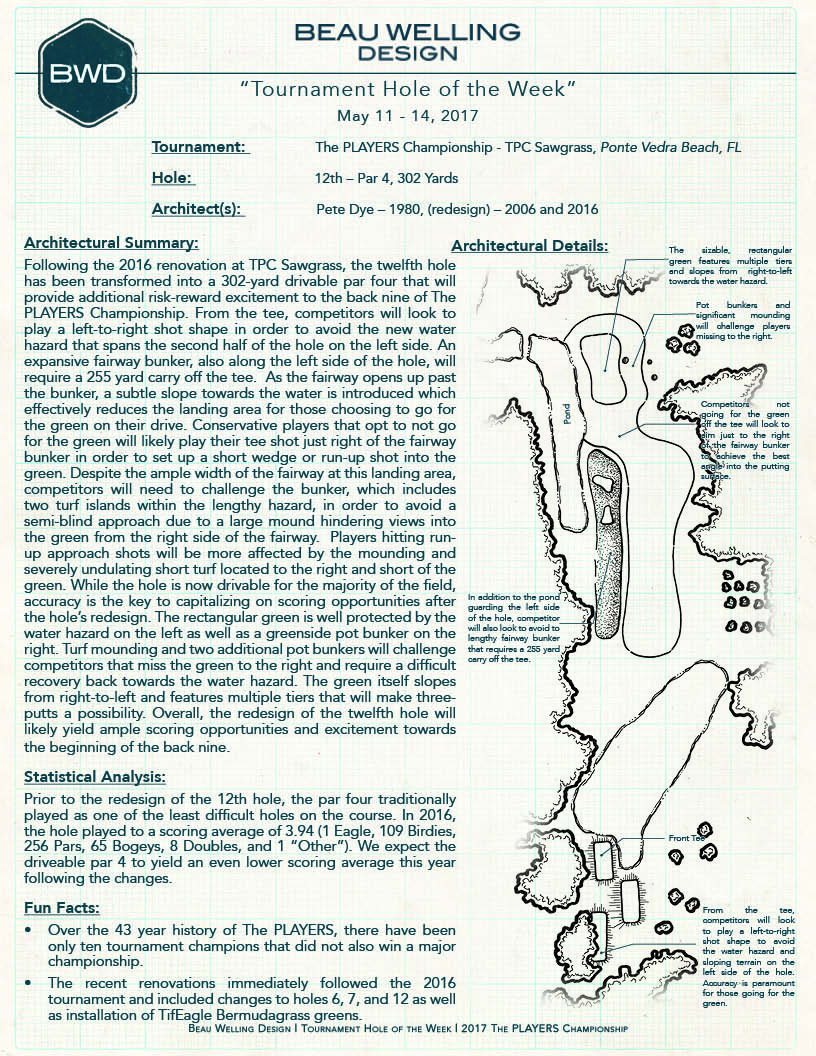 Architectural Summary:
Following the 2016 renovation at TPC Sawgrass, the twelfth hole has been transformed into a 302-yard drivable par four that will provide additional risk-reward excitement to the back nine of The PLAYERS Championship. From the tee, competitors will look to play a left-to-right shot shape in order to avoid the new water hazard that spans the second half of the hole on the left side. An expansive fairway bunker, also along the left side of the hole, will require a 255 yard carry off the tee. As the fairway opens up past the bunker, a subtle slope towards the water is introduced which effectively reduces the landing area for those choosing to go for the green on their drive. Conservative players that opt to not go for the green will likely play their tee shot just right of the fairway bunker in order to set up a short wedge or run-up shot into the green. Despite the ample width of the fairway at this landing area, competitors will need to challenge the bunker, which includes two turf islands within the lengthy hazard, in order to avoid a semi-blind approach due to a large mound hindering views into the green from the right side of the fairway. Players hitting run-up approach shots will be more affected by the mounding and severely undulating short turf located to the right and short of the green. While the hole is now drivable for the majority of the field, accuracy is the key to capitalizing on scoring opportunities after the hole’s redesign. The rectangular green is well protected by the water hazard on the left as well as a greenside pot bunker on the right. Turf mounding and two additional pot bunkers will challenge competitors that miss the green to the right and require a difficult recovery back towards the water hazard. The green itself slopes from right-to-left and features multiple tiers that will make three-putts a possibility. Overall, the redesign of the twelfth hole will likely yield ample scoring opportunities and excitement towards the beginning of the back nine.

Statistical Analysis:
Prior to the redesign of the 12th hole, the par four traditionally played as one of the least difficult holes on the course. In 2016, the hole played to a scoring average of 3.94 (1 Eagle, 109 Birdies, 256 Pars, 65 Bogeys, 8 Doubles, and 1 “Other”). We expect the driveable par 4 to yield an even lower scoring average this year following the changes.