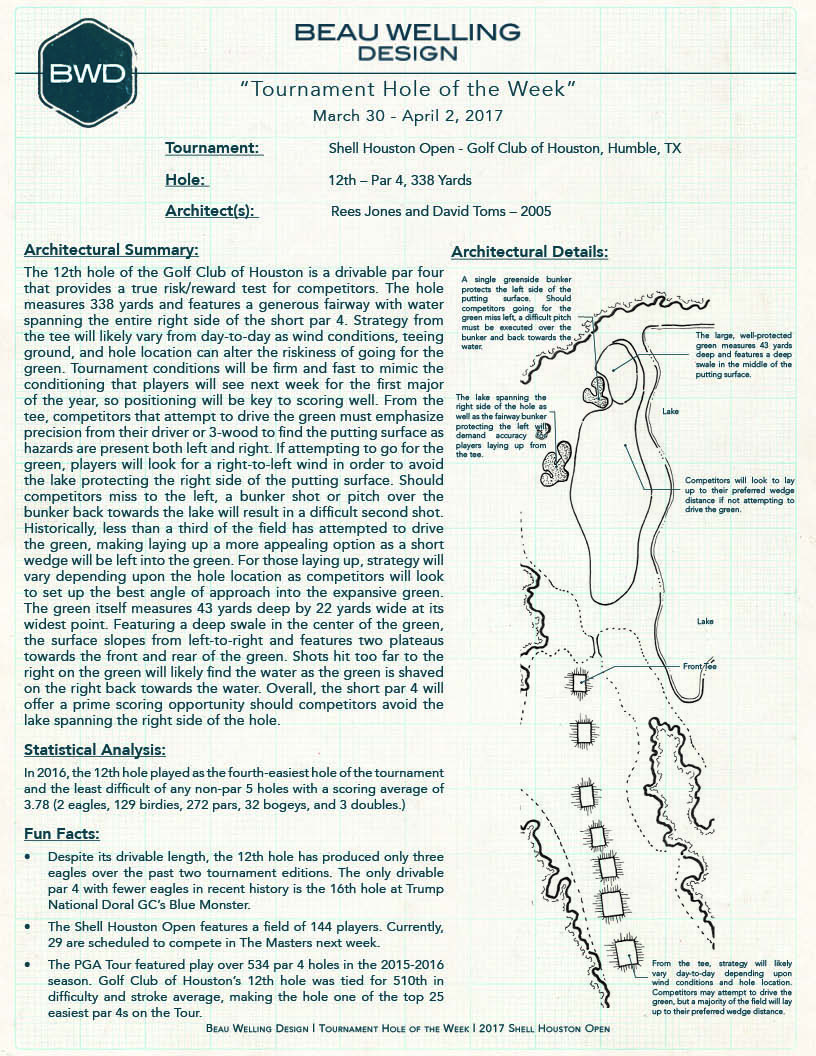 The 12th hole of the Golf Club of Houston is a drivable par four that provides a true risk/reward test for competitors. The hole measures 338 yards and features a generous fairway with water spanning the entire right side of the short par 4. Strategy from the tee will likely vary from day-to-day as wind conditions, teeing ground, and hole location can alter the riskiness of going for the green. Tournament conditions will be firm and fast to mimic the conditioning that players will see next week for the first major of the year, so positioning will be key to scoring well. From the tee, competitors that attempt to drive the green must emphasize precision from their driver or 3-wood to find the putting surface as hazards are present both left and right. If attempting to go for the green, players will look for a right-to-left wind in order to avoid the lake protecting the right side of the putting surface. Should competitors miss to the left, a bunker shot or pitch over the bunker back towards the lake will result in a difficult second shot. Historically, less than a third of the field has attempted to drive the green, making laying up a more appealing option as a short wedge will be left into the green. For those laying up, strategy will vary depending upon the hole location as competitors will look to set up the best angle of approach into the expansive green. The green itself measures 43 yards deep by 22 yards wide at its widest point. Featuring a deep swale in the center of the green, the surface slopes from left-to-right and features two plateaus towards the front and rear of the green. Shots hit too far to the right on the green will likely find the water as the green is shaved on the right back towards the water. Overall, the short par 4 will offer a prime scoring opportunity should competitors avoid the lake spanning the right side of the hole.