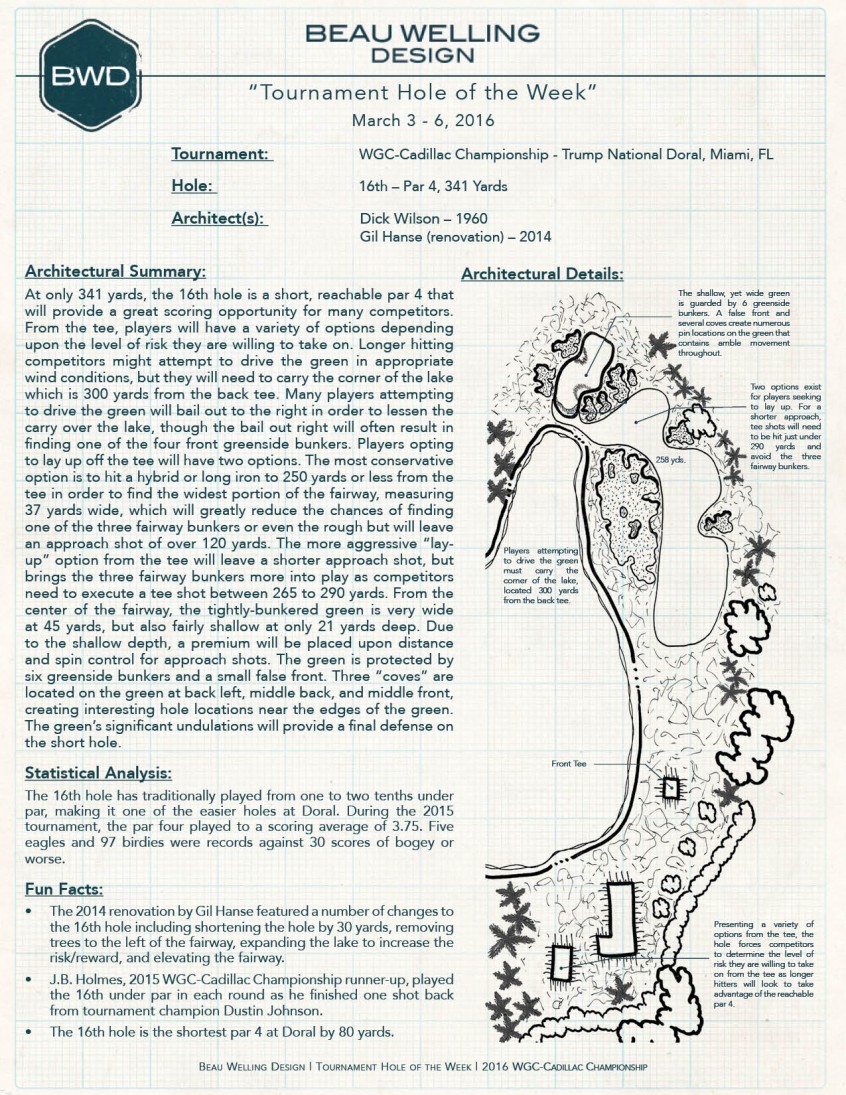 At only 341 yards, the 16th hole is a short, reachable par 4 that will provide a great scoring opportunity for many competitors. From the tee, players will have a variety of options depending upon the level of risk they are willing to take on. Longer hitting competitors might attempt to drive the green in appropriate wind conditions, but they will need to carry the corner of the lake which is 300 yards from the back tee. Many players attempting to drive the green will bail out to the right in order to lessen the carry over the lake, though the bail out right will often result in finding one of the four front greenside bunkers. Players opting to lay up off the tee will have two options. The most conservative option is to hit a hybrid or long iron to 250 yards or less from the tee in order to find the widest portion of the fairway, measuring 37 yards wide, which will greatly reduce the chances of finding one of the three fairway bunkers or even the rough but will leave an approach shot of over 120 yards. The more aggressive “lay-up” option from the tee will leave a shorter approach shot, but brings the three fairway bunkers more into play as competitors need to execute a tee shot between 265 to 290 yards. From the center of the fairway, the tightly-bunkered green is very wide at 45 yards, but also fairly shallow at only 21 yards deep. Due to the shallow depth, a premium will be placed upon distance and spin control for approach shots. The green is protected by six greenside bunkers and a small false front. Three “coves” are located on the green at back left, middle back, and middle front, creating interesting hole locations near the edges of the green. The green’s significant undulations will provide a final defense on the short hole.

The 16th hole has traditionally played from one to two tenths under par, making it one of the easier holes at Doral. During the 2015 tournament, the par four played to a scoring average of 3.75. Five eagles and 97 birdies were records against 30 scores of bogey or worse.