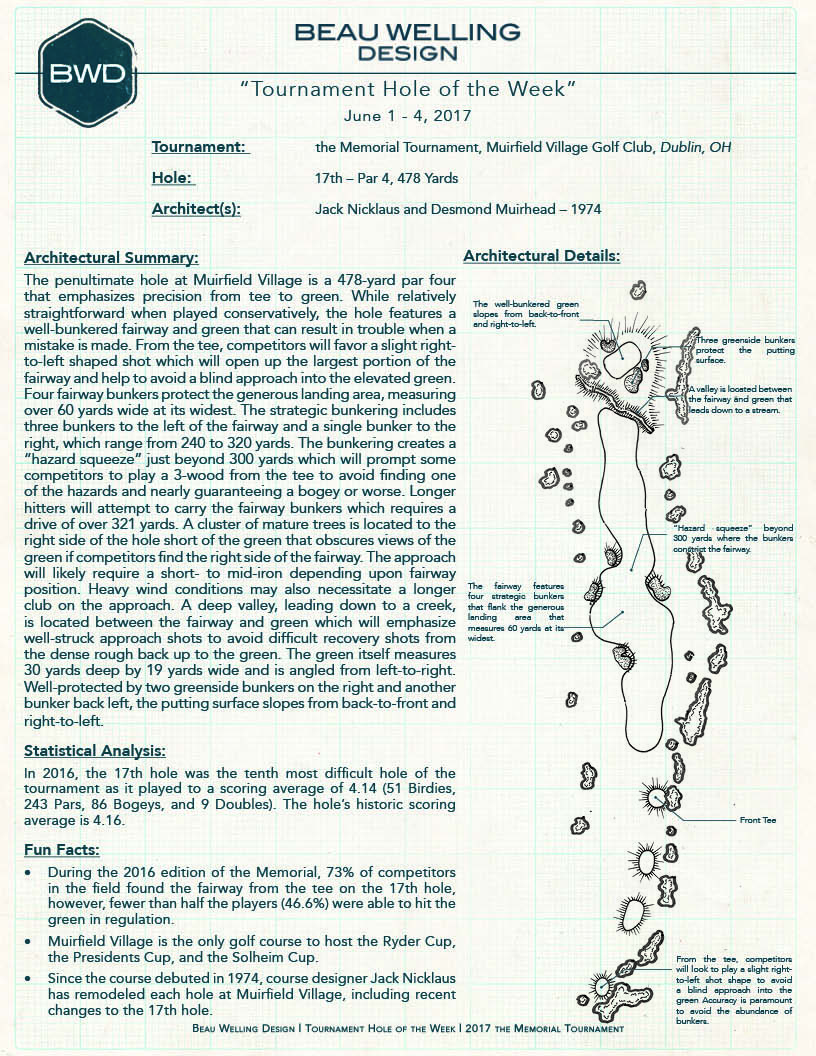 Architectural Summary:
The penultimate hole at Muirfield Village is a 478-yard par four that emphasizes precision from tee to green. While relatively straightforward when played conservatively, the hole features a well-bunkered fairway and green that can result in trouble when a mistake is made. From the tee, competitors will favor a slight right-to-left shaped shot. This opens up the largest portion of the fairway and helps to avoid a blind approach into the elevated green. Four fairway bunkers protect the generous landing area, which measures over 60 yards wide at its widest. The strategic bunkering includes three bunkers to the left of the fairway and a single bunker to the right, which range from 240 to 320 yards. The bunkering creates a “hazard squeeze” just beyond 300 yards which will prompt some competitors to play a 3-wood from the tee to avoid finding one of the hazards and nearly guaranteeing a bogey or worse. Longer hitters will attempt to carry the fairway bunkers which requires a drive of over 321 yards. A cluster of mature trees is located to the right side of the hole short of the green that obscures views of the green if competitors find the right side of the fairway. The approach will likely require a short- to mid-iron depending upon fairway position. Heavy wind conditions may also necessitate a longer club on the approach. A deep valley, leading down to a creek, is located between the fairway and green which will emphasize well-struck approach shots to avoid difficult recovery shots from the dense rough back up to the green. The green itself measures 30 yards deep by 19 yards wide and is angled from left-to-right. Well-protected by two greenside bunkers on the right and another bunker back left, the putting surface slopes from back-to-front and right-to-left.