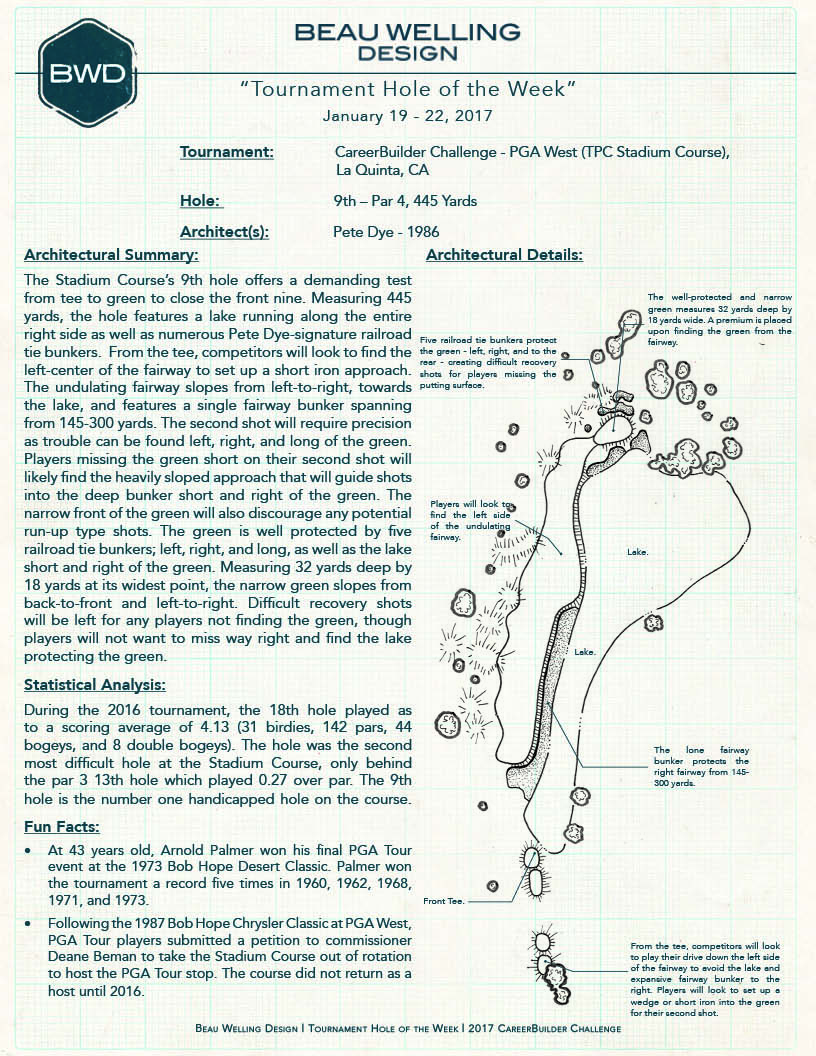 The Stadium Course’s 9th hole offers a demanding test from tee to green to close the front nine. Measuring 445 yards, the hole features a lake running along the entire right side as well as numerous Pete Dye-signature railroad tie bunkers. From the tee, competitors will look to find the left-center of the fairway to set up a short iron approach. The undulating fairway slopes from left-to-right, towards the lake, and features a single fairway bunker spanning from 145-300 yards. The second shot will require precision as trouble can be found left, right, and long of the green. Players missing the green short on their second shot will likely find the heavily sloped approach that will guide shots into the deep bunker short and right of the green. The narrow front of the green will also discourage any potential run-up type shots. The green is well protected by five railroad tie bunkers; left, right, and long, as well as the lake short and right of the green. Measuring 32 yards deep by 18 yards at its widest point, the narrow green slopes from back-to-front and left-to-right. Difficult recovery shots will be left for any players not finding the green, though players will not want to miss way right and find the lake protecting the green.

During the 2016 tournament, the 18th hole played as to a scoring average of 4.13 (31 birdies, 142 pars, 44 bogeys, and 8 double bogeys). The hole was the second most difficult hole at the Stadium Course, only behind the par 3 13th hole which played 0.27 over par. The 9th hole is the number one handicapped hole on the course.

At 43 years old, Arnold Palmer won his final PGA Tour event at the 1973 Bob Hope Desert Classic. Palmer won the tournament a record five times in 1960, 1962, 1968, 1971, and 1973.
Following the 1987 Bob Hope Chrysler Classic at PGA West, PGA Tour players submitted a petition to commissioner Deane Beman to take the Stadium Course out of rotation to host the PGA Tour stop. The course did not return as a host until 2016.