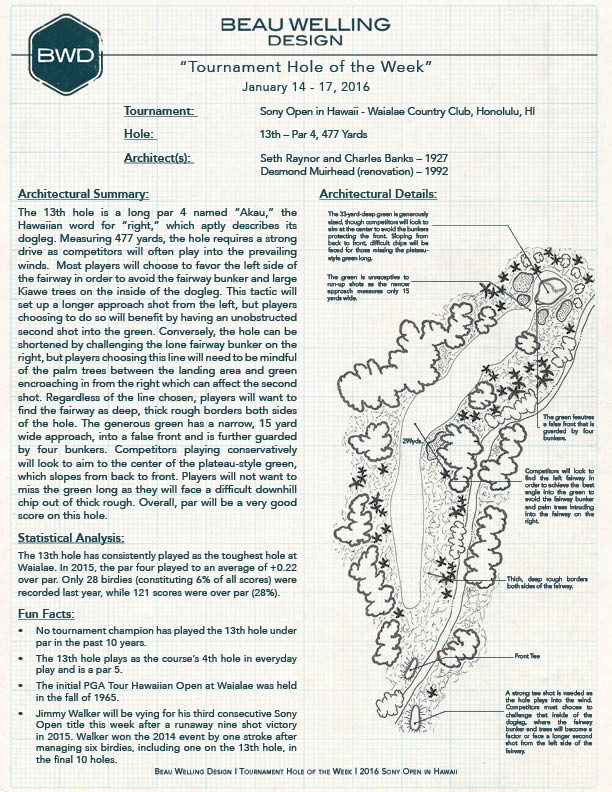 Architectural Summary:
The 13th hole is a long par 4 named “Akau,” the Hawaiian word for “right,” which aptly describes its dogleg. Measuring 477 yards, the hole requires a strong drive as competitors will often play into the prevailing winds. Most players will choose to favor the left side of the fairway in order to avoid the fairway bunker and large Kiawe trees on the inside of the dogleg. This tactic will set up a longer approach shot from the left, but players choosing to do so will benefit by having an unobstructed second shot into the green. Conversely, the hole can be shortened by challenging the lone fairway bunker on the right, but players choosing this line will need to be mindful of the palm trees between the landing area and green encroaching in from the right which can affect the second shot. Regardless of the line chosen, players will want to find the fairway as deep, thick rough borders both sides of the hole. The generous green has a narrow, 15 yard wide approach, into a false front and is further guarded by four bunkers. Competitors playing conservatively will look to aim to the center of the plateau-style green, which slopes from back to front. Players will not want to miss the green long as they will face a difficult downhill chip out of thick rough. Overall, par will be a very good score on this hole.

Statistical Analysis:
The 13th hole has consistently played as the toughest hole at Waialae. In 2015, the par four played to an average of +0.22 over par. Only 28 birdies (constituting 6% of all scores) were recorded last year, while 121 scores were over par (28%).