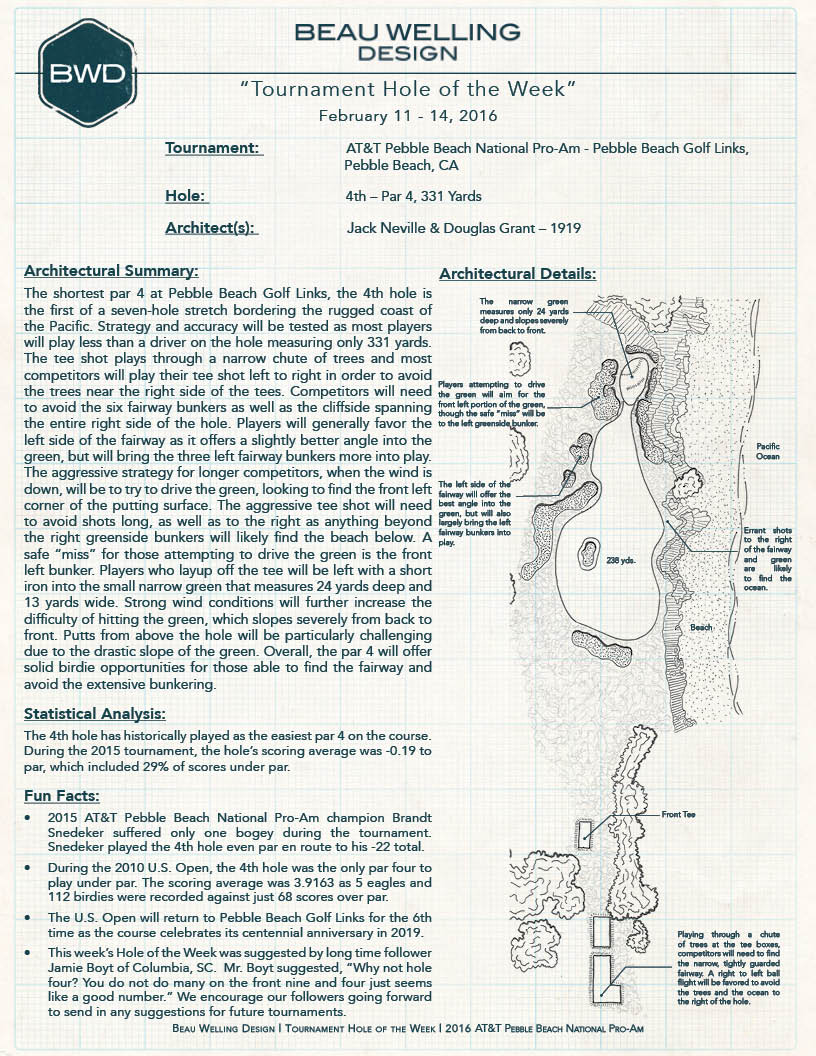 Architectural Summary:
The shortest par 4 at Pebble Beach Golf Links, the 4th hole is the first of a seven-hole stretch bordering the rugged coast of the Pacific. Strategy and accuracy will be tested as most players will play less than a driver on the hole measuring only 331 yards. The tee shot plays through a narrow chute of trees and most competitors will play their tee shot left to right in order to avoid the trees near the right side of the tees. Competitors will need to avoid the six fairway bunkers as well as the cliffside spanning the entire right side of the hole. Players will generally favor the left side of the fairway as it offers a slightly better angle into the green, but will bring the three left fairway bunkers more into play. The aggressive strategy for longer competitors, when the wind is down, will be to try to drive the green, looking to find the front left corner of the putting surface. The aggressive tee shot will need to avoid shots long, as well as to the right as anything beyond the right greenside bunkers will likely find the beach below. A safe “miss” for those attempting to drive the green is the front left bunker. Players who layup off the tee will be left with a short iron into the small narrow green that measures 24 yards deep and 13 yards wide. Strong wind conditions will further increase the difficulty of hitting the green, which slopes severely from back to front. Putts from above the hole will be particularly challenging  due to the drastic slope of the green. Overall, the par 4 will offer solid birdie opportunities for those able to find the fairway and avoid the extensive bunkering.

Statistical Analysis:
The 4th hole has historically played as the easiest par 4 on the course. During the 2015 tournament, the hole’s scoring average was -0.19 to par, which included 29% of scores under par.