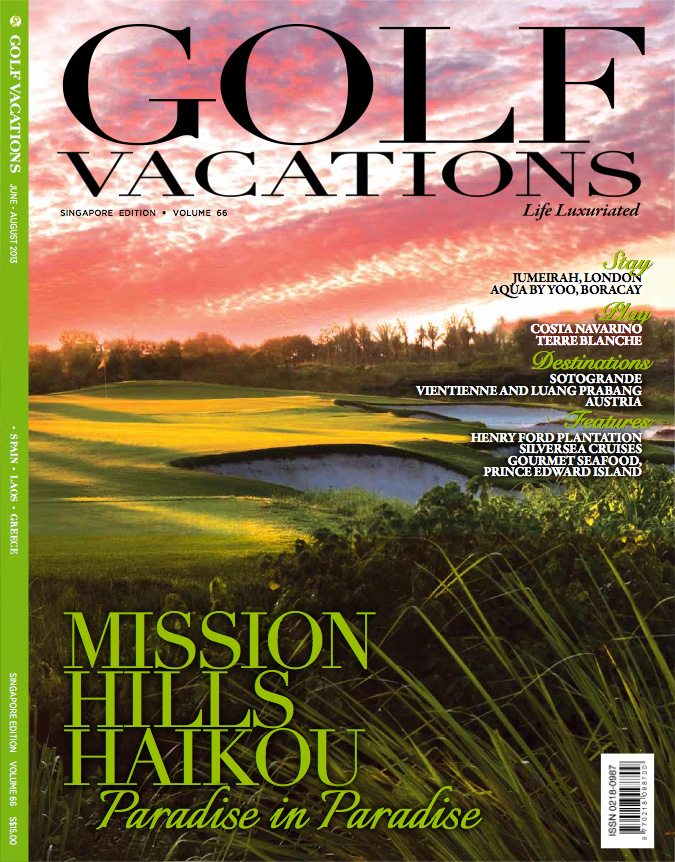 He picked up the phone, called Tom Fazio, and got a job. If only life were as simple as that. Like many golf course designers, Beau Welling grew up with the game, loving it and simply wanting more. By the time he admitted to Brown University in Providence, Rhode Island, he was already accomplished enough to be part of the collegiate golf team. This was where he decided to combine his love for the game with a penchant for technical detailing and an artistic inclination.

But golf wasn’t his only love. There was also curling.“The short answer is that I got fascinated watching it on TV during the Winter Olympics. Being from South Carolina, ice is a fairly foreign concept, but the more I watched, the more fascinated I got for three reasons – it is a strategic game which fits the way I think; it is an ancient Scottish game so being a golfer, there is a natural affinity. And lastly, I like thinking about trajectories and effects of friction that are so germane to curling; it’s like putting in golf.”

In any event, after the Torino Winter Olympics, he couldn’t stand it any longer to just watch on TV and so decided to show up in Bemidji, Minnesota, to watch the US Curling National Championships.

“I think everyone in USA curling was so shocked that someone from the south could even find Bemidji in the middle of the winter that they basically just took me in,” he laughs. Today, he is one of the US representatives to the world curling federation, and, he says, “I am getting very excited about Sochi next year,” a Russian enclave where the 2014 Winter Olympics will be held.

Getting back to college, Beau eventually signed up for a program in landscape architecture at the Rhode Island School of Design right across the street from Brown. For most students, they would be hard-pressed to find a proper internship program, let alone a job, but not for Beau. One of America’s finest golf course designers, Tom Fazio, happened to pick up a project in his hometown in Greenville, South Carolina called Thornblade Club, and Welling’s father was one of the developers of the project. So, the young college kid basically got Fazio’s number from him, and called to ask a simple question: ‘How does one become a golf course designer?’

Tom basically had to take the phone call as I was a son of a client. We had several nice chats, and luckily for me, he ultimately said,“Well, if you are really that interested, you should come work for us when you are home for the summer”

“Fazio is today, a Hall of Famer with more courses ranked among the top 100 in the US than anyone else in the business and I was very fortunate to get that opportunity which ultimately led to me working for Tom full-time after college and being able to learn from a true master of the craft,” he exclaims.

While at Fazio Designs, he was put to work on a great number of fantastic projects including Eagle Point in Wilmington, North Carolina, Sage Valley in Graniteville, South Carolina and Alotian Club outside of Little Rock, Arizona, and learnt the importance of building quality and helping clients realise their goals rather than building a personal testament. To this very day, Welling has made it his core principle when doing his work.

In all, he spent 11 years there gaining experience and knowledge of various developments from real estateoriented projects like Mountaintop in Cashiers, Kukio in Kona, and Vaquero outside of Dallas, to resort courses like Pinehurst in North Carolina and Waterville in Ireland. “All these projects are very diverse in terms of landscape, environment, and intended market but the one thing they all have in common is that the clients left very happy,” he says, attributing his time with Tom Fazio as an opportunity to build a strong reputation for himself and being involved in some challenging builds.

Of particular place in pride is Eagle Point, which was designed to be a players’ course. But the owners back then had trouble finding a site.“We ended helping them on a fairly exhaustive search before finally settling on a property that had great proximity to where they wanted to be but it had suffered lots of damage from a recent hurricane,” Welling recalls.

Because it abutted the coastal waterways, it had also lots of environmental restrictions and these constraints in some ways created some confounding challenges that the team helped overcome one by one, including having the site get hit by two additional hurricanes. But they eventually created a fabulous world-class product on time and on budget.

Treading the line with the environment is a modern day concern for golf course designers and developers alike and while many offer a politically correct viewpoint, Beau has something more to add. “I am actually an environmentalist at heart so I have no problem abiding by strict rules and regulations. What can be challenging sometimes though is interfacing with those that oppose development of any kind and use environmental issues to try to stop development,” he reveals, and gives an example of another project some years back.

“This project had some significant environmental objections to it. It got kind of crazy at one point so I went and sat down with the leader of the opposing group to try to understand what the issues really were. After several meetings we came to appreciate one another’s viewpoints and were ultimately able to work out a compromise solution.”

“I think that’s a good process but both sides need to be open-minded to solution. It is funny this particular group now calls me from time to time to see what I think of their position on other projects, just to see if I think they are being unreasonable. I think if everyone on a project had that kind of attitude, there really would not be any challenges at all,” he confesses.

Eventually leaving Tom Fazio was to be a very difficult decision. In many ways, he was like a father figure and the staff there like family, but he always saw the bigger picture and knew he had to make that choice. The market in the US was slowing and Fazio did not have a desire to go overseas.

According to the National Golf Foundation, the first decade of the millennium saw the number of golf courses increase 3 percent to 16,000 nationwide, but the number of rounds played declining 6 percent. In 2000, 30 golf courses closed while 399 new courses opened. In 2009, 140 closed and only 50 opened. 607 courses have closed between 2005 and 2010.

“Some markets are overbuilt while others are in need of more golf courses. Some golf courses may need to be redeveloped into other uses as they don’t function now as they did in the past,” opines Welling.

“As I have written about in your publication last issue, I think we are just on the cusp of a big boom in golf in Asia and I think golf’s upcoming inclusion in the Olympics in Rio is going to be a big catalyst for growing the game in Asia. It is an exciting time and I feel there is lots of opportunity, not just for more golf courses but also for elevating the quality of golf courses in general.”

Welling left Fazio in August 2010 and arrived in China. Today, almost 6 years after the fact, he has an associate based there while he travels from his base back in hometown Greenville.

His current work in Tianjin involves a unique 27-hole development with Du Sha, who is listed in Forbes as among ‘The 400 Richest Chinese’ in their 2005 list. What that means is that there is big budget in the project which sees 27 different major tournament champions involved as design consultants, one for each hole, with Beau putting it altogether and making things happen. The project looks to be complete sometime in 2014.

“The quality of what we are doing there is off the charts and I think people are really going to stand up and take notice. Mr. Du has spent a lot of time traveling globally, playing golf, and is super committed to building something extraordinary in Tianjin. So we feel very fortunate to have the 27 Club be our first real entry into the Asian market,” says Welling.

Which begets the question, ‘What happened to the years between leaving Fazio and then?’ The answer: Tiger Woods Design. The travails of the current world number one golfer’s experiment into golf course design in the fast developing emirate of Dubai is well documented but not the man who was to help make this a reality.

Woods launched Tiger Woods Design in 2006 after 10 years on the PGA Tour and was quoted that he waited to start his business until he had played at courses around the world. The first customer was to be the Al Ruwaya Golf Course in Dubai, attached to a development with 100 villas, 75 mansions, 22 palaces, a 360,000-squarefoot hotel, a golf academy and luxury shops as part of a $1 billion Dubailand development.

Woods’ fee was said to be $20 million plus a percentage of real estate sales, which led him to hire Welling to help him build the course. With only six holes completed, the bulldozers came to a halt in 2009 and things never got underway ever since. Today, Donald Trump looks set to build his first course in the Middle East at the site where Woods was supposed to complete his.

“I have been fortunate and honoured to assist Tiger with his golf design efforts on a consulting basis,” says Welling when quizzed about his involvement. But like many who have worked closely with the very private golf superstar, he prefers not to talk too much about it: “I consider him not only a client but a friend and as such, it wouldn’t be my place to talk about his projects.”

When the dust finally settled however, Beau and his team got to work quickly around the fast expanding golf boom that is Asia. Apart from Club 27, he is also involved in a massive 54-hole complex outside of the Thai resort town of Hua Hin where many reputable golf tracts are already in bloom. This, however, looks to be the biggest attraction in time to come with a strong resort developer from Singapore at the helm. He is currently in the planning stage and is looking to begin construction here next year.

“I really wanted to broaden the scope of what I was doing. In addition to normal golf course design, we have gotten very involved in conceptual master planning as project conceptualization. Clients care about end results and oftentimes the golf course is just one part of the puzzle. Being able to lend our expertise and experiences on other parts of the puzzle has been very rewarding and exciting,” he says in relation to the massive developments that he is working on in China and Thailand.

But one pure golf course renovation project that is new on the cards involved a little island-nation further south. Just one month ago, Singapore’s Raffles Country Club announced that they have engaged Beau Welling Design for the reconstruction of their Palm Course, one of two 18-hole tracts in the golf club.

“I am so super excited about being hired to help redesign the Palm Course at Raffles. I have spent a lot of time in Singapore over the last few months really getting to understand the property as well as the club and what the committee’s vision for the redevelopment is. I feel 100 percent confident that what we do at Raffles is going to be beyond anyone’s wildest expectations. The club has a great group of members and I look forward to spending lots of time on site over the next couple of years,” he enthuses.

And so will the members and golfers here in Singapore when a new Palm course begins to take shape at Raffles Country Club.